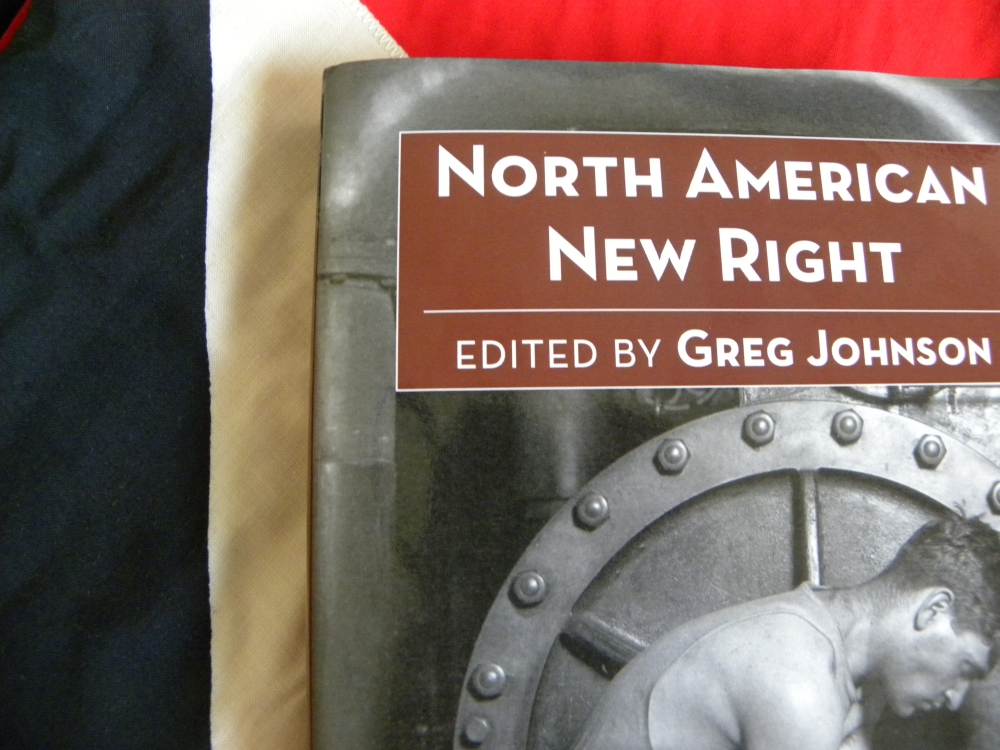 It is in a moment of great pride that I write this congratulatory note. I received Volume 1 (2012) of North American New Right in yesterday’s post.  It is a massive volume and without one superfluous page – I look forward to reading each of the essays, some for a second or third time. One of the many (oh so many) examples of genius that Nietzsche jotted in a notebook came to mind as I thumbed the collection: “The will strives for purity and ennoblement.” Of course, the poor anti-dogmatist would hate me for turning his pithy little phrase into dogma; but his modernity, as bad as it was, is not ours, and every piece of armor we can use to brace ourselves against the endless destruction of our nobility and pride must be fastened daily to our minds and bodies. Thus, his mnemonic device becomes my mantra, and I am fighting this war in Nietzsche’s name, but more on that later.

Am I an intellectual? Hell yes! But do I understand intellectual/cultural systems as armaments in a war to the death? Oh hell yes! Thus I read Nietzsche and combust. I read Homer and glow. And I read Covington and a certain finger starts to itch. Books are a literate culture’s purest means of ensuring its own survival, because they house the ideas that create conditions of possibility. Ideas are a weapon. That’s all they’ve ever been and ever will be. It is only the bourgeois form of life that seeks to empty ideas of their (non-economic) value, leading us to believe that all knowledge and wisdom is just neutral information, something to be consumed – and that is only so that it may win this war! I’m a man of ideas, words, and concepts, yet I am no idealist. We must know so as to fight, and what we know, or better put how we conceive, determines if, and for whom, we fight.

While I know that even materialism is a conceptual system, the vulgar material does have value. Thus, when I held NANR in my hands, the Counter-Currents website was suddenly made real. It was tangible. Now the words seem to have more weight, more value, and more power! The authors seem to exist more profoundly, now that I know a strategic “turning off of the power grid” won’t erase them from my sight. Of course, this was just a sensation – one motivated by my rather aristocratic approach to reading – but it was affective nonetheless.

The quote from Jonathon Bowden on the cover flaps serves Counter-Currents well. It is to your credit that in two years the site has become an important point of reference for the New Right. The Occidental Quarterly and Observer, The Alternative Right, and Arktos, along with Counter-Currents, give us enough access to critical thought – more often than not at the Ph.D. level – that we have no need to feel like useless specs of sand adrift in the maelstrom. More than that, though, we have no excuses to be so estranged from the colossal greatness we once stood to inherit from our culture (not that we did anyway, for as long as Homer and Nietzsche are among us, we have no one to blame for cashing in “the will to perfection” and “the will to greatness” for a few shekels and a television). Still more importantly, we have a space, a home.

As a recent, if late-arriving, Ph.D., I knew as I was searching for a professorial opportunity to expound on the virtues of multiculturalism, relativism, egalitarianism, and liberalism that my heart would always lay elsewhere; I knew I would be living a lie and choking back vomit with every word I spoke. I knew enough, that is, to forfeit the title for which I had worked so hard. Yet I do so with a daring, defiant smile because I know that I am not alone. I walk too often in paths cleared by giants to feel comfortable slinking around in shadows and dark passages like a rat. I feel that this behavior, as tactical as it might be in a guerilla war or in maintaining employment, is not befitting a people such as ours. Whispering in a café corner about Athena, Roma, and the long lost audacity and heroism of arditi and schutzstaffel is not how I am introducing my son to his birthright; nor is speaking freely about glory, heroism, and duty while preparing him for a life of corporate enslavement.

And that brings me to an ulterior motive in writing this open letter – to commit myself to being a part of the New Right, not just as student but also as professor, in all possible ways. I’m not looking at the New Right as an audience – only bourgeois “writers” do that – but as a cadre of worthy camerati, as the Fascists say. There is too much at stake for me to sit on the sidelines complaining about modernity; especially when there are others like you who have already joined the fight. The liberal human, the “last man,” in each of us must be exterminated, and the New Right offers the only contemporary means to extend the war that our people have been fighting some-2000 years.

One thought on “Open Letter To Dr. Greg Johnson”